At the Fraunhofer IMS, biosensors made of nanomaterials based on carbon, for example, are being developed that can be used to detect viruses and bacteria, among other things. For this to happen selectively, tools from chemistry are needed to make the interaction with the target structure highly specific. For biofunctionalization, fluorescent nanomaterials are first provided with an organic shell (e.g., a biomacromolecule such as DNA). This is then chemically modified to bind biological motifs (e.g., metabolites of bacteria), antibodies, or signaling molecules, thereby changing the optical properties of the fluorescent nanomaterials. The ability to control the functional shell (organic phase) surrounding the nanomaterials used thus forms the basis for selective biofunctionalization and thus for highly sensitive and fast Nano sensors.

In the development of our biosensors, we combine the single-molecule sensitivity of biofunctionalized nanomaterials with highly sensitive single-photon detectors and at the same time increase the number of sensors that can be evaluated. For this purpose, we combine multiple optical Nano sensors with different biofunctionalization and integrate them into functional sensor arrays. In this way, analytes can be identified and distinguished on the basis of their characteristic signature ("fingerprinting"). In this way, bacteria, for example, can be detected indirectly via their metabolic products: different bacterial species release characteristic mixtures of molecules into their environment, which can be used as a "chemical fingerprint" to distinguish them. This has been achieved, for example, with Nano sensors based on carbon nanotubes that have been chemically modified to detect various metabolites of bacteria as well as specific virulence factors. (https://www.nature.com/articles/s41467-020-19718-5 ) Subsequently, the different biofunctionalized Nano sensors were immobilized in hydrogel arrays. Near-infrared imaging from 25 cm away from these arrays successfully distinguished different bacterial strains based on their intensity pattern after addition. In addition, the tunability of the optical properties of the nanomaterials due to their size provides further multiplexing capabilities and has enabled spectral coding to differentiate the bacteria. Thus, the technology of biofunctionalized Nano sensors offers the potential as an "artificial sniffer" to simultaneously detect a whole range of different substances and to develop smart surfaces for differentiated pathogen diagnostics.

We are also researching methods with which the sensitive nanomaterials can be applied to different surface structures in an application-oriented manner and their influence on sensor technology.  Here, too, the nanomaterials used are proving to be versatile. Depending on the application, they can be immobilized, for example, on smooth surfaces such as silicon-based substrates or enclosed in porous matrices of polymer-based hydrogels. Our goal is to develop "smart surfaces" that can not only be beneficial in pathogen diagnostics, but could also, for example, enable the testing of entire drug libraries or revolutionize the search for new vaccines.

As a Toolbox for the Covalent Functionalization of Carbon Nanotubes with Peptides and Proteins - Mann - 2020 - Angewandte Chemie International Edition - Wiley Online Library.

Remote near infrared identification of pathogens with multiplexed nanosensors

In recent years, nanomaterials in particular have proven to be versatile in the search for new materials for use in sensor technology.

To explore new materials and the structure of biomolecules located on their surface, we use near infrared detection. 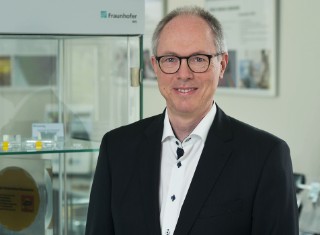